Hateful Eight shows the lack of analysis in the piracy debate 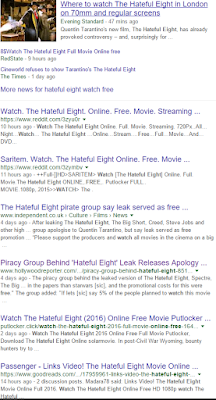 A quick search on Google for a free download of the Hateful Eight provides lots of options - probably an equal balance between legitimate licensed viewing and pirate activity.

Richard Gladstein writes in the Hollywood Reporter that the movie has been illegally downloaded 1.3 million times since Xmas and that Google is basically to blame for not taking more action.

The piracy group behind the leak which occurred pre-release, Hive-CM8, claim a physical copy with no encryption was bought off the street. They also claim that the PR around the leak has helped movie sales.

A few conclusions can be drawn

1. Despite the deployment of technical solutions by the movie business to fight piracy they are not working 100% which unfortunately given the nature of digital replication and distribution presents an issue. The video games industry has had more success in this area but they have the advantage of a console to tie into.

2. As no accepted metric for the losses caused by piracy has been established yet bizarre claims that piracy helps the movie business cannot be dismissed. Until this is addressed the debate will remain circular.

3. The legal framework is not fit for purpose and the simple principles behind the Berne Convention and copyright generally have been diluted. If the situation really is that all rights are non-exclusive in the digital age then relevant governments should simply say that and we can all adjust accordingly.
Posted by klipcorp at 12:13